All the details mentioned above can make or break a persons purchasing choice. I hope it helps and appreciate any feedback in the comments below. Click on all images for full size HD quality and find more LEGO reviews in the drop down menu above.

Mini Figures
Considering this is only a $35 priced LEGO set, two mini figures seems about right. Being the smallest of the new The Force Awakens, both mini figures included in this set mean absolutely nothing to me…yet. I have nothing to base their appearance on, so I’ll just have to base them on what they are here.

So as I said, two mini figures are included in this set; Rey and Unkar’s Thug. Since this is Rey’s Speeder set, it is only fair we begin with, Rey herself. Sporting tan pants with printing on the front, Rey comes with details on the front and back of the body. The tan coloured wrapping sits over a pale blue shirt and has a brown belt that moves around the front and back. All the detail present is top quality and very clean. Nothing smudged and sadly no sleeve printing. The colours look really good here helping to blend in with the desert surroundings from the movie.

Rey comes with two facial expressions; smiling and serious and even has a unique hair piece I’ve yet to see in mini figure form. It is a pony tail, but has tiny bumps toward the back. Either use the hairpiece, or swap it out for the mask/headscarf. Sandy in colour, the headscarf is absolutely fantastic and has so much detail, i’m blown away. It is not just smoothed off, but has patterns all over like the scarf has actually been wrapped around the head. Not only does this itself look good, but it even includes goggles to keep the sand away. I’m simply and utterly in love with this piece. So pick or choose the hair or the mask. 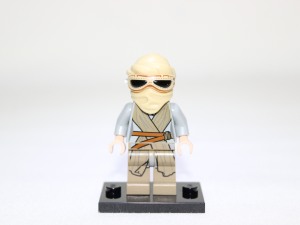 Rey with her headscarf

Finally, Rey comes with a weapon made of two lightsaber hilts and a black rode. Connected together they form a staff of sorts. The weapon itself isn’t clever in design, but fits in with the put together look of the speeder and character. Almost forgot to mention the satchel bag included with Rey. Just before putting the headpiece on, throw the satchel loop over one hand and then clip the head on. The bag is brown in colour and even has a tiny bit of detail on the front. Not much else to say.

Unkar’s Thug now, and I have no idea who this character is. Dark grey from bottom to top, there are some black lines here and there and what appears to be a jacket on top. Very hard to tell because apart from some sand stains on the body piece (front and back), and some silver dots, there isn’t much to go on.

The head piece is the most interesting. Two large black eyes take up most of the face, but still not sure if they’re part of goggles. If they are, the look is really striking and works really well. Especially when you throw the hood piece on next. Again, dark grey in colour and sitting just over the head. The way the hood is designed and in relation to the large eyes/goggles, the other look really pays off here. The Unkar’s Thug really comes together here and those large eyes seem so expressive. Completing his look is a gold crowbar, that although plain to look at, stands out amongst the dark colours. 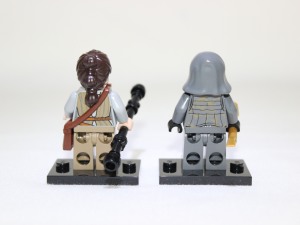 Rear view of the mini figures

Before moving on, its worth mentioning again how difficult it is to rate these mini figures based sorely on their appearances here. The Force Awakens hits cinemas December 2015, so until then, my thoughts are that Rey is a brilliant figure. Colourful and has plenty of accessories to help her standout, yet Unkar’s Thug is a bit of a let down. The colouring is too dark and its difficult determine what is what on the body. The detailing and printing has a hard time standing out, but tries its hardest with the bits of sand.

Main Build
Mentioned just above, the hardest part about reviewing these new Star Wars LEGO sets is that I can’t base these builds on anything except footage from trailers, which isn’t much. So when it comes to Rey’s Speeder, I can only talk about the build itself, and have zero thoughts on its comparison to the film version. Not a bad thing I guess, but it would be interesting to see the film to LEGO comparison.

I’ll begin the build shortly, but it needs to be noted this LEGO build is one of the worst I’ve ever encountered when it comes issues. You see, not only was the instruction booklet all folded up in the box and damaged, but two pages had ink damage and one entire brick was dirty. And when I say dirty, I mean that it appears to have smoke or fire damage. The piece itself is mostly hidden within the build, but the sides of the brick is still seen and I notice this damage instantly.

Damaged piece. Not sure if its fire and smoke damage, but can’t be removed.

Funny thing is, no one else has mentioned having these issues, but if you have, let me know in the comments below.

Rey’s Speeder is one truly unique vehicle to come out of a LEGO Star Wars set in a long time. Usually its ships, walkers and sets. But a single seat vehicle with reddish brown pieces all over, just seem so out of place amongst the very grey brick world of Star Wars builds. From just looking at the Speeder, it looks like two independent builds mashed together and hoping for the best.

Let’s begin with the internals of the vehicle. This is where, like most LEGO, the dark grey bricks are used to make up the support structure. Everything is really well designed to make the most out of the 193 pieces included. A few bits and pieces are used to provide colour, but for the most part it’s a lot of darker bricks. Of course, this section will all be hidden later on.

A few angle pieces are used to have some bricks working side on, which is how the seat portion of the build comes together. No steering wheel, instead two controls sticks to give it a sporty look. What I really enjoy is that Rey’s mini figure is pretty much sitting on two engines. Both are, for the most part, identical when looking from behind, but when you swing the Speeder to the side, you can see where each differs. The top engine houses the seat for Rey, while the bottom has a play action. If you twist the engine, it will rotate a feature inside the belly of the Speeder and give you access later on once the walls are in place. At first the feature makes zero sense, but you really need to wait until the build is complete.

The entire rear section is made up of grey bricks to really enforce the engine look. Now some people may be upset with the dramatic colour change from front to back, but I really happen to like this change in tone. Helps the engines stick out a whole lot more, has really has a junkyard look to it.

On each side of the engines are various clips which don’t do much at first. Later on, you get two spoiler bricks to clip on. They are dark grey in colour, but once the stickers are added, all the necessary weathering and paint is added to the rear section. What I like best about these spoilers, is that you can angle them however you wish. Yes, LEGO has their position on the box, but make your own choice. 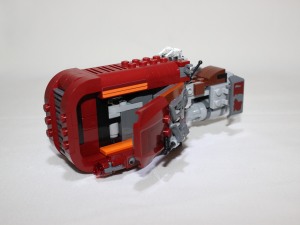 Side panel opened showing the internals

As we move onto the front section, LEGO does an excellent job of making the speeder appear much sleeker than it has any right too. The nose of the Speeder has some grilled 2×1 grey bricks giving a very aggressive look. On each side of the bulky front, it’s curved off and rounded which carries over to the top and bottom where two stud firing missiles are snapped on. Again, such a smart choice of bricks.

Along the top we have so more grilled bricks, this time in the Speeder’s reddish brown finish, and ends at the pilot controls where two clear ramp pieces are used for a window covering.

At this point of the build though, I was left a little confused by the large gap in the middle of the Speeder itself. Then LEGO, because of the many red studs, decides to include a small holding section for them. Or at least that’s what I’m hoping the area is for. With the use of a box piece, you attach a lid and simply slide it into the belly of the Speeder. The gap is filled and now you’ve a place to store the left over studs. So ingenious.

Once the belly of the vehicle is complete, LEGO sets about covering the sides up. Thanks to the many clips and hinges used on the vehicle, a few curved bricks are placed on the side and tightly snap into the clips. The reddish brown is accented by some good use of gold bricks and finally, with the sides closed, you add a few stickers and its done.

Usually I’m totally against the heavy use of stickers to enforce detail, but I can let it slide here. Much like the Deep Sea Submarine build, the use of stickers never feels out of place nor do that stand out. They simply blend into the already existing design and add a few bits extra detail.

What I find interesting here is that one side of the Speeder has clips and snapping pieces like crazy, while the other side is simply finished off. The reason for the clips though is to house all the weapons and devices into the Speeder. A large saw, binoculars and even a blaster of some kind. I don’t mind, but for symmetry, one side really sticks out.

Beside the control side on the body of the Speeder is another clip that up until this point was left empty. Once you lock the mini figure in place though, you realise Rey’s satchel bag and weapon are housed here. Such an easy fix and makes losing said accessories nigh impossible.

The finished build. Both mini figures and the Speeder.

Final Thoughts
Whether you choose to have the side compartments open or closed while on display, the level of detail really pops. For the amount of bricks included, the way it all comes together really surprises me. LEGO have managed to take a throwaway vehicle (for me) and turned it into a build I’ll continue to display amongst my other Star Wars builds.

Rey on the Speeder

With a place for everything Rey comes bundled with and a boxy yet sleek design, this tough and sturdy Speeder races to the top of best build quality in recent times.