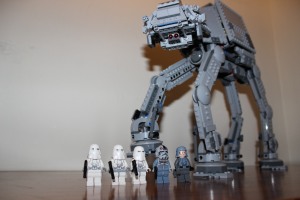 Like always, let’s begin this review by mentioning all the above information. Not everyone cares, but for those that do, it can make a very big difference. Click on each image to get a better look in greater detail, and stick around for a question at the bottom.

Judge me by my size, do you… 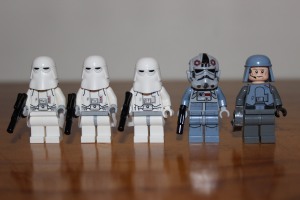 Mini Figures
To begin, five mini figures are included here. In order of appearance in the picture above, we have 2 x Imperial Snowtroopers, a Snowtrooper Commander, AT-AT Driver and finally General Veers. The usual high quality we’ve come to expect from LEGO is on display here. All mini figures have clean print lines on the front and back of each piece. The body pieces are really special when it comes to the Snowtroopers because of all the added detailed shown. Turn those mini figs around to the back and you can clearly see the backpack, which is a nifty piece of building. It’s a simply connected before you put the head-piece on and adds a wealth of detail to the figure.

The Snowtrooper Commander gives you a much better look without the backpack and shows off the fake fabric dress they all have. I think I just referred to it as a dress. Oh well, I’m not a fan of them on my mini figures as they tend to come off damaged after playing…I mean displaying them for extended periods of time. But since these mini figures don’t sit in the cockpit, it is something I can let slide. Just this time though. 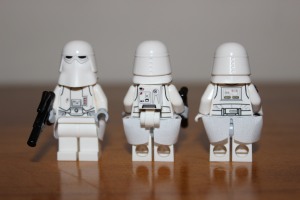 Front and rear details with backpack on display

Apart from General Veers, all the mini figures come with full helmet pieces. I don’t mind the Snowtrooper helmet, but love the AT-AT Driver one. It really stands out. General Veers looks good and have a very serious printed look on his face with the microphone across his cheek. Not much going on accessories wise, apart from the small blaster for the Snowtroopers and Driver, the General is given a set of binoculars. 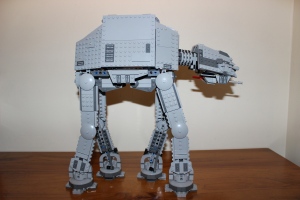 Side profile. Giant body and head with the posable legs

Main Build
Everyone knows the action scene from The Empire Strikes Back. The Empire has located the Rebel base on the ice planet Hoth and sends in the Snowtroopers to take them down. It is here that Star Wars fans were introduced to the infamous AT-AT Walkers and players were given years of enjoyment when it came to Star Wars games.

The AT-AT walkers a like a cross between giant elephants and tanks. While slow-moving, they pack powerful heavy armour and plentiful weapons to lay waste to any and allow enemy of the Empire. LEGO has released the AT-AT in the past in numerous sizes, but this current 2014 release is just about perfect for anyone young or old.

With a grand total of 1137 pieces (including a brick separator), including 5 mini figures, LEGO has proven that old designs still work. I was worried about the top-heavy nature of the set, but thankfully upon completing the build, I have been able to put those fears aside. The legs don’t come until much later in the build, so I’ll save those till a little later.

For now, It’s all about the body itself. Using a lot of locking joints, the interior of the body seems pretty bare. It is very reminiscent of a skeleton with the entire working structure on display. All the pieces are locked in tight which a few big joints allowing for head movements, and later on, leg movement. 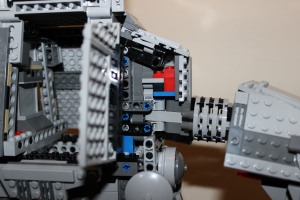 Inner workings behind the neck joint

I always get scared when following instructions and you can’t tell exactly how it locks together, and this did that a few times. At one point I was clicking it all together when I realised I had made a grave error. After going back 6 pages, I found my mistake and had to break down and rebuild an entire section.

The head joint allows side-to-side movement only to 180 degrees. I thought that was a bit strange, however later on, once the circular bricks are in place, it conforms more to the film scene of only minimal side movement. All the ‘armour’ grey bricks that go on are later and detail to its tough look. And it is a tough build. Body only, I dropped it from waist height and only managed to break off one single large side panel. A simple fix and it was perfect again. Impressive.

Once the panels on either side are constructed and connected, the body is complete. Later additions to the head/cockpit will finalise it, but otherwise you’ve got yourself a solid build. A nifty feature built into the floor panel of the body is the trapdoor. Controlled via a switch piece on the rear, you can place any mini figure over it and pull the switch to see him fall. It’s why I wish Luke was included. Oh well. 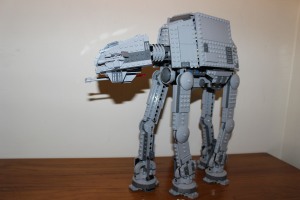 The legs are the most interesting builds here. Largely repetitive I know, but with firm clicking joints together, it allows you to really pose the AT-AT however you choose, within limits. I have a complaint, and don’t now if it is just mine, but on the upper leg where it connects to the body, the circle grey pieces tend to pop off. At first they sit snugly, but when I attempt different poses, sometimes they pop off. I’ve had this happen only a few times and only with the front legs. Not sure why either because they all lock in and nothing touches them when moving. So I can’t understand it.

It is a complaint, and a minor one at that, but still worth mentioning. An easy way around it is to simply remove the circle bricks, pose the AT-AT and then snap them back on. No harm done and it doesn’t break off.

Speaking of posing, the AT-AT tends to rely on you posing it firmly. I’ve tried to have one leg off the ground to give that stomping action from the film, but it doesn’t always stay standing. Mind you, my set is sitting on a flat wood surface, so I imagine carpet would provide better grip. You can manage it, but it’s a touch and go scenario.

As LEGO has done in the last year, flick missiles seem to slowly be phased out in favour of spring firing lasers. And here on the front of the AT-AT, they look perfect. Sitting just under the head piece, two spring firing lasers are included, with a spare also, and it looks ripped directly from the film. 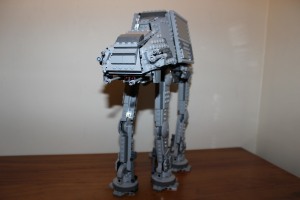 Front profile. In all its glory. Beautiful design.

Final Thoughts
Overall, I was really impressed by the AT-AT when I saw it on shelf. After spending 6 hours building it (and I won a speed build LEGO competition once), I’m even more in love with it. LEGO has managed to really capture the scene from The Empire Strikes Back with a truly imposing build. The height and weight of the AT-AT could be an issue for some, but good things don’t always come in small packages. With a cockpit for two, and plenty of room in the back for three Snowtroopers, you can have all the mini figures wherever the AT-AT goes.

With fully posable legs and feet that always find even ground, I’m completely sold the AT-AT is hands down the best LEGO Star Wars build from 2014 and one you must add to your collection. Now, if only LEGO had thought to include a hidden handle for easy play and movement.

What was your favourite Star Wars film, and why?